One Week in Northern Thailand

Explore the historical, cultural and natural sites of Thailand from the central to the northern regions. The program highlights include the UNESCO world heritage sites of Ayutthaya and Sukhothai; the unspoiled city of Uthai Thani, where the local people still live-in raft houses along the river and the unique Hub Patad Cave. The trip continues to the Golden Triangle, once notorious for the traffic of opium, and ends in the ancient Lanna Kingdom, Chiang Mai, the “Rose of the North”.

Day 1-3: VANCOUVER BC CANADA – BANGKOK
Depart from Vancouver to Bangkok. Upon arrival, meet and transfer to the hotel. Rest of the Day at leisure or join optional tours.


Day 4: BANGKOK – AYUTTHAYA – UTHAI THANI-NAKORN SAWAN [B/L/-]
Pick up from the hotel and drive to Ayutthaya to visit the UNESCO World Heritage ancient city. Ayutthaya was a former and by far longest time active capital of Siamese Kingdom that existed from 1350 to 1767. Ayutthaya was friendly towards foreign traders, including Chinese, Vietnamese, Indians, Japanese and Persians, and later the Portuguese, Spaniard, Dutch and French, permitting them to set up villages outside the walls of the capital, also called Ayutthaya. In the sixteenth century, it was described by foreign traders as one of the biggest and wealthiest cities in the East. Visit the temple ruins Wat Mahatat and Wat Chai Wattanaram.
Then proceed to Uthai Thani province to visit Wat Tasung Temple, famous for its big and magical crystal hall made of pieces of mirror and Buddhist meditation. Late afternoons enjoy cruising on a converted rice barge on Sakaekrang River to observe the people’s way life along the river. Then visit the local market on the riverside offering fresh vegetables, seasonal fruits and river fishes.
Drive to Nakorn Sawan and check in at 42C The Chic Hotel, Deluxe Room.


DAY 5: KAMPAENGPHET – SUKHOTHAI [B/L/-]
After breakfast proceed to Kamphaengphet. Visit the historical park of Kampaengphet. Enjoy exploring the historical highlights of the world heritage, including the ruins of Wat Pra Kaew, a large royal temple built in the 13th century which was used for important city events. Continue to Sukhothai province which literally means "Dawn of Happiness". It was the first truly independent Thai Kingdom established in 13th Century. The kingdom was most flourished and prospered during the era of King Ramkhamhaeng the Great
who was a great warrior and a wise and knowledgeable ruler in politics, culture, and religious. Most importantly, he was the first inventor for the Thai alphabets which have been developed into the national language that is being used today.
Visit the Sukhothai Historical Park, a part of the UNESCO World Heritage Site to explore the restored royal temples and historical sites. Sukhothai is also awarded by UNESCO as a Creative City of Crafts and Folk arts including antique gold jewelry, textile weaving,
earthenware, and wood carving. Visit a pottery community producing the famous “Sangkhalok” Pottery. There are white glazed and green glazed potteries shows a beautiful draw motif under the glaze in brown which are similar to Chinese’s Shu Jol pottery from Vietnam and found during Song dynasty or the end of Yuan dynasty around BD19-20. Overnight at the Le Charme Hotel in Sukhothai


DAY 6: SUKHOTHAI –PHRAE – CHIANG RAI [B/L/-]
Breakfast at the hotel. Drive to Phrae and visit Prathat Suthon Temple which boasts the beautiful Burmese and Northern Thai style buildings. The folk museum in the temple compound displaying rare antique items is worth a visit. Continue driving to Chiang Rai
via Phayao with a short break at the Lake of Kwan Phayao, the largest freshwater fish habitat in the upper North which provides the livelihood of local people. The city of Chiang Rai was built by King Meng Rai in 1262 and was long period a center of Thai – Laotian Lanna Kingdom before it was defeated by Burmese army. See the highlights of Chiang Rai including Wat Rong Khun Temple, known as the White Temple, and the bluish Wat Rong Sua Ten. Overnight at Laluna Hotel in Chiang Rai.


DAY 7: CHIANG RAI – GOLDEN TRIANGLE – CHIANG MAI [B/L/-]
Breakfast at the hotel. Drive to Chiang Saen, an ancient capital located on the bank of the Mekong River. It was built by the ancestors from South China, which moved towards the South and founded the first capital of Lanna Kingdom (about years 900-1000 A.D).
Visit the Golden Triangle, where Thailand, Laos and Myanmar meet on the Mekong River, which was once supposed to be the center of the poppy cultivation in Thailand. View the upstream scenery of the Golden Triangle and pay a visit to the Opium Museum. After lunch at a local restaurant continue driving to Chiang Mai along mountainous scenic route. Arrive Chiang Mai and check-in at the Amora Hotel.
Time at leisure to explore the city of Chiang Mai. Overnight at Amora Hotel, located in the heart of Chiang Mai town.


DAY 8: LOCAL MARKET – DOI SUTHEP - BORSANG – WAT PHRASING [B/L/-]
After breakfast at the hotel. Visit Chiang Mai’s local market to observe people’s way of life and enjoy tasting authentic local food and seasonal fruits. Then proceed to the temple Wat Phra That Doi Suthep, the most famous and revered temple in Chiang Mai. After ascending its 306 steps up to the temple ground, you will be rewarded by the stunning view over Chiang Mai and magical atmosphere of the temple and its shrines. The temple is also famous for Buddhist meditation retreat in English language. Chiang Mai has been selected for membership in the UNESCO Creative Cities Network – Crafts and Folk Art. With a history dating back over 720 years Chiangmai is rich in cultural value, especially in crafts and folk art which combine harmoniously the cultural roots, creative industry, and contemporary design. After lunch enjoy exploring the crafts of Chiang Mai with your guide at Borsang community, producing paper crafts and umbrella. Guests have an opportunity to try a hands-on creative activity to paint your own umbrella or a fan which you may consider take home as a souvenir (not included). Late afternoons visit the temple Wat Phra Sing Worawihan, one of Chiang Mai’s most beautiful and important temples built in Lanna style. The temple enshrines the sacred Buddha image of Chiang Mai and Lanna Kingdom, Phra Phutta Sihing. According to Lanna tradition, people born in the Year of the Dragon have to pay homage
Overnight at Amora Hotel.


Day 10: BANGKOK [Breakfast]
Transfer to airport to take flight back to Home Country.


Remarks
• Prices and itinerary are subject to change without prior notice
• Insurance not included. All travelers are recommended to buy travel insurance. For detailed terms and conditions, please contact Silkway Travel & Cruise Inc. or visit www. silkway.com 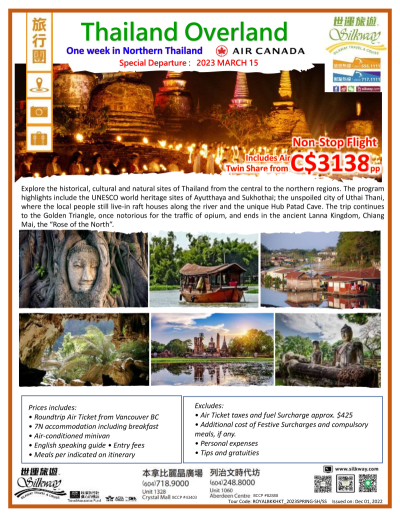 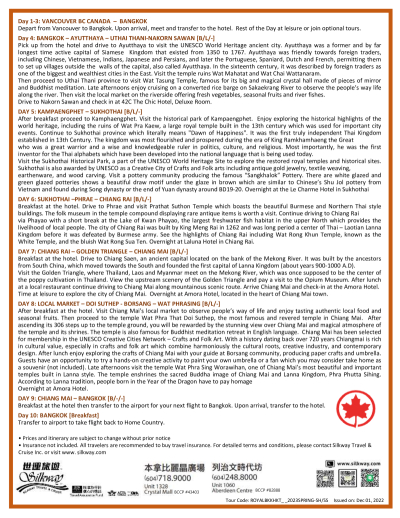